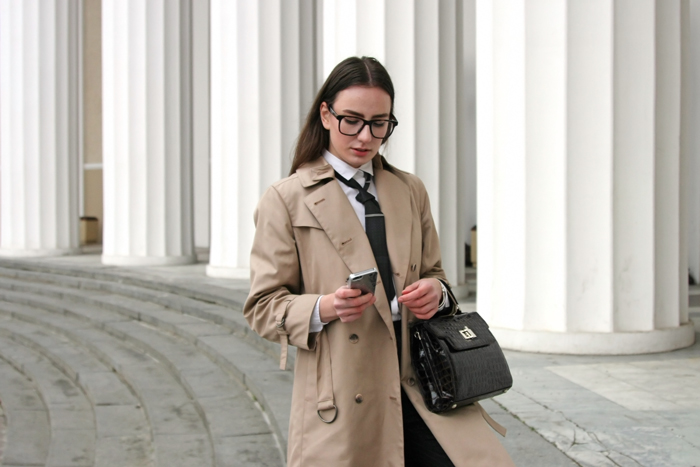 Merging with the colors of Moscow.
My Moscow adventures did go beyond the very center of the city, the Red Square, Manezhnaya Square and Manege itself, where the largest concentration of fashionistas could had been found during those days of late October. Yes, my adventures and one little, funny monkey, I mean my niece, took me to a place that is widely known as VDNKh. A pretty big complex of exhibition space is considered to be one of the biggest both in Europe and world, which these days attracts literally hundreds of people who come here to catch up with families and friends. And I sincerely fell in love with such a different architecture of those pavilions – Armenia, Uzbekistan, Ukraine and the rest. Was thinking the other day how truly magical should VDNKh look during Winter festivals with lots of snow and Christmas lights and during Summer when fountains work and everything blossoms… 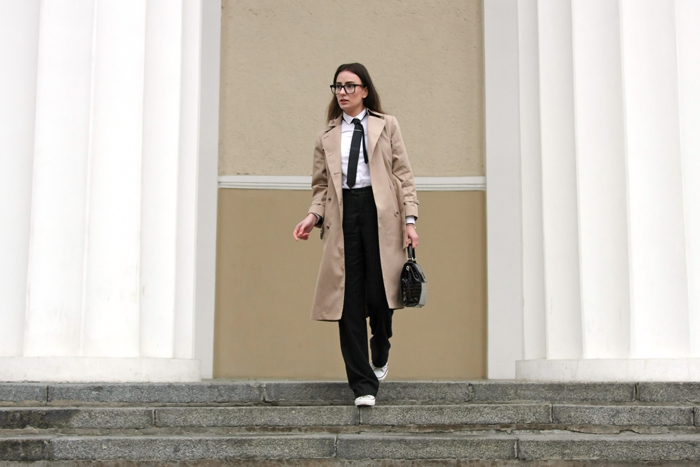 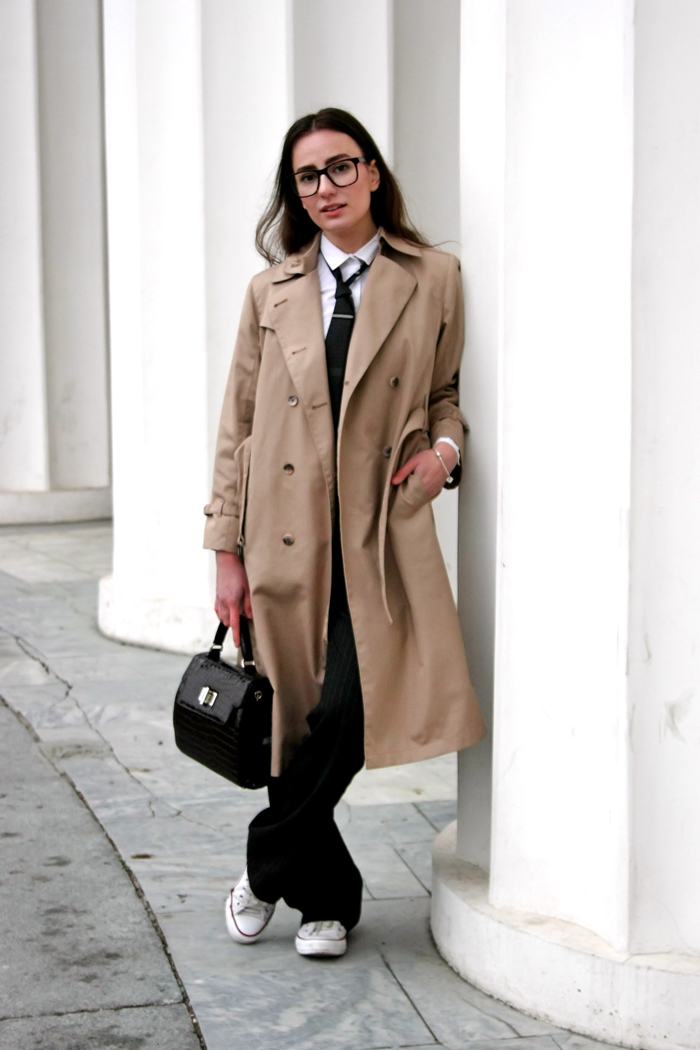 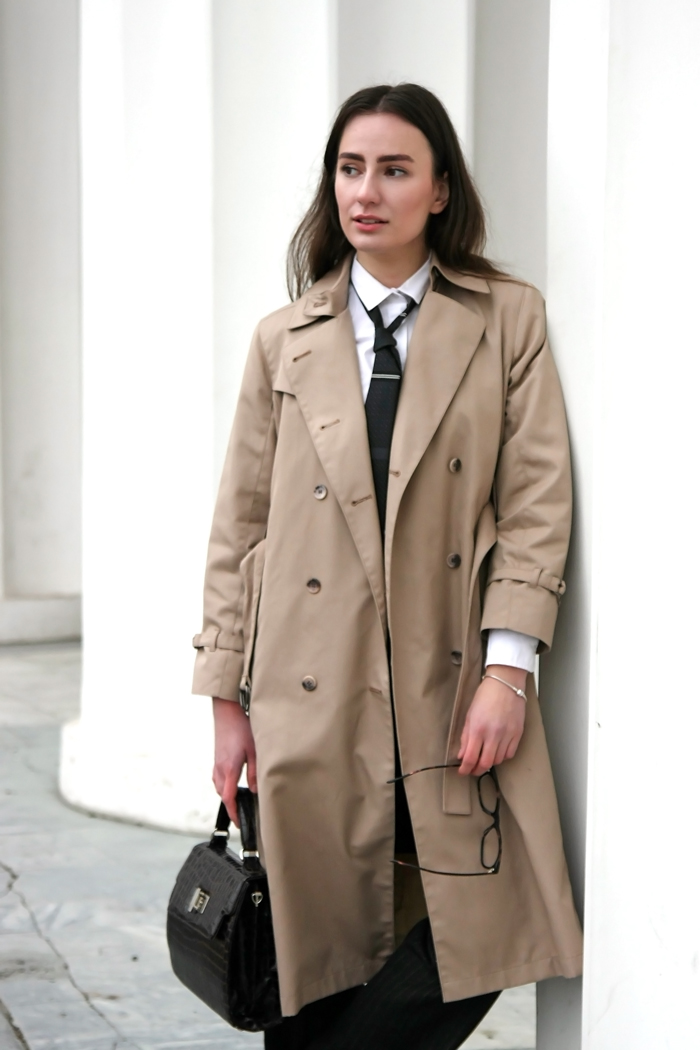 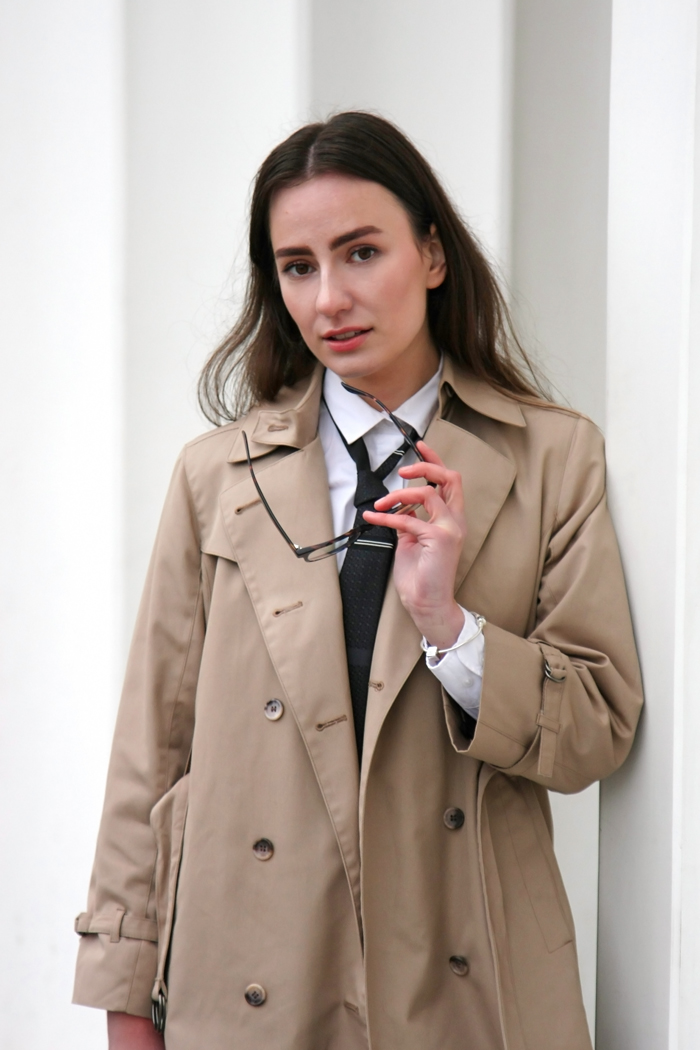 Meanwhile, I found my fourth look for Mercedes-Benz Fashion Week Russia totally matching with the main pavilion of VDNKh, the one that stands directly behind Lenin’s (the monument of Vladimir Lenin) back. And in first place this match is more about color palette. From white and beige to brown and deep grey. This is the second time during this Moscow Fashion Week when I gave preference to a more laid back outfit combination, in which I feel totally comfortable. Less polished, more masculine or better say business-like, but with certain shades of classics and elegance. Have to say that this version of a fashion intellectual on the go, the fashion intellectual of a big city, not a geek chic’er much though, comes as one of my favorites. 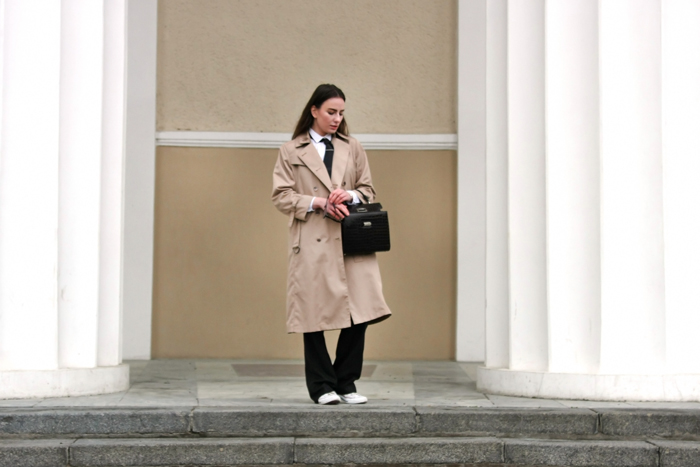 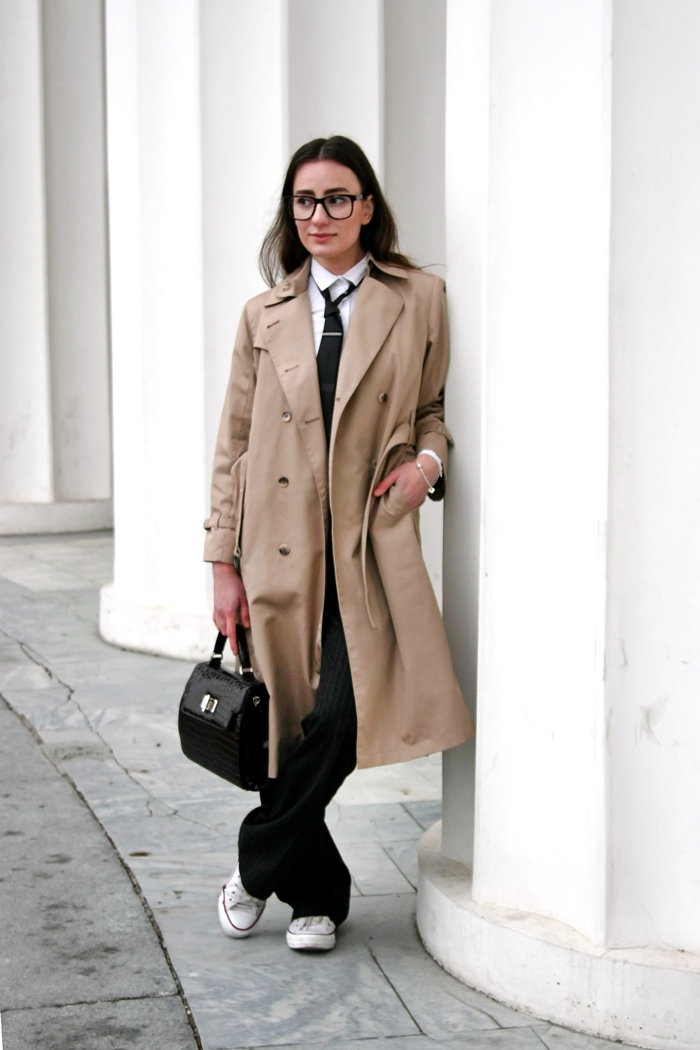 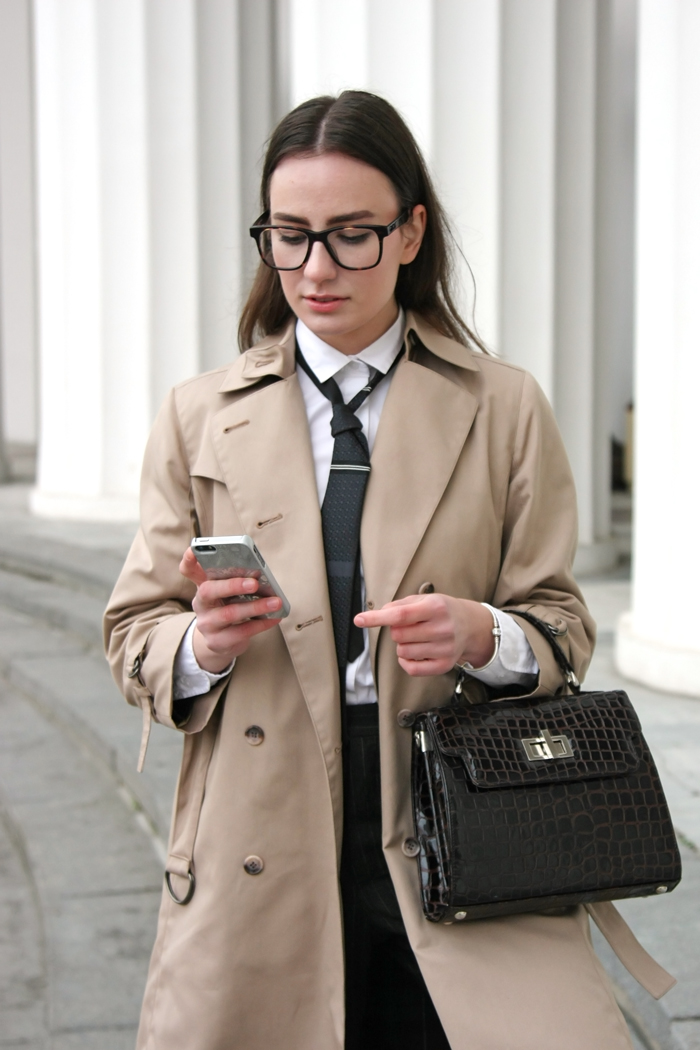 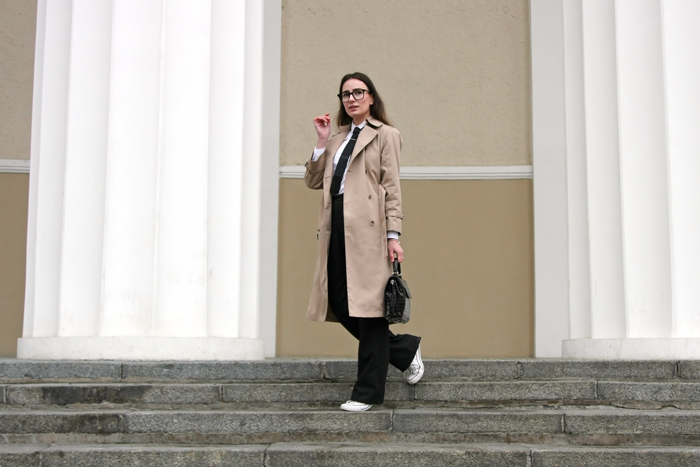 Beloved Firmoo glasses, slightly loosened tie, white sneakers instead of more formal shoes and sleek yet wild hair are the details that actually formed this entire look I wanted to pull so badly on the fourth day of MBFWR. The mentioned above details happened to be that fashion icing that topped this classy, formal and really simple outfit. Just think about it, white button down shirt, vertically striped pants, classically beige trench coat and an elegant vintage handbag. I believe such pieces can be found in a wardrobe of every single fashionista, be it her or him, and can be mixed and matched together or with totally different stuff. Just think about it. So many different outfit combinations can be pulled. This time I made a go for masculine and intellectual vibes. And am more than overwhelmed by the outcome. 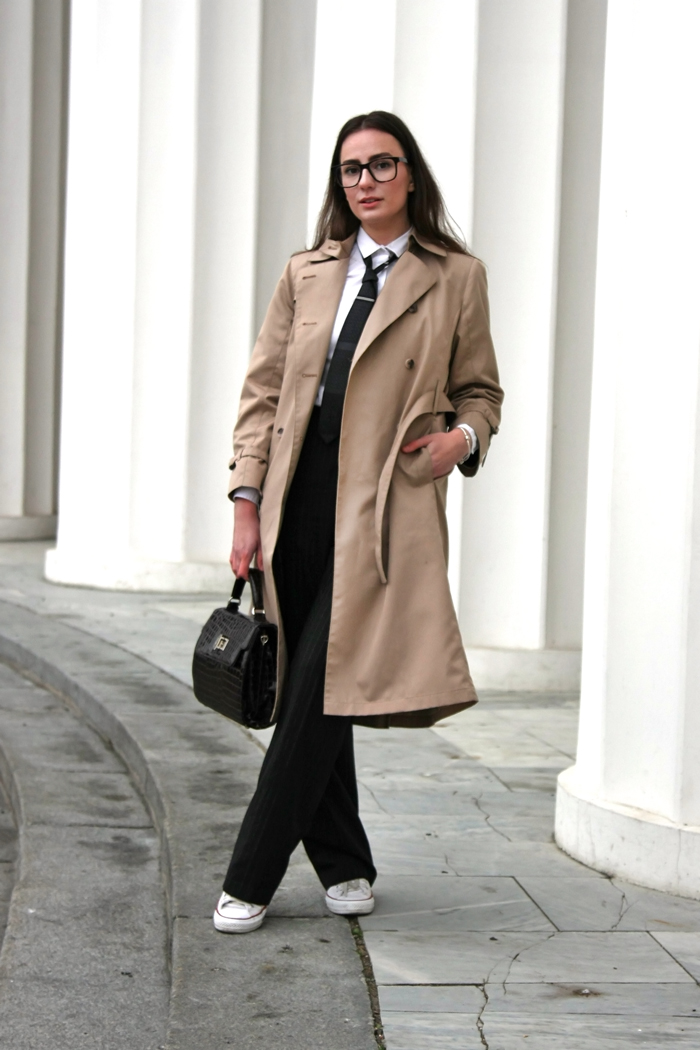