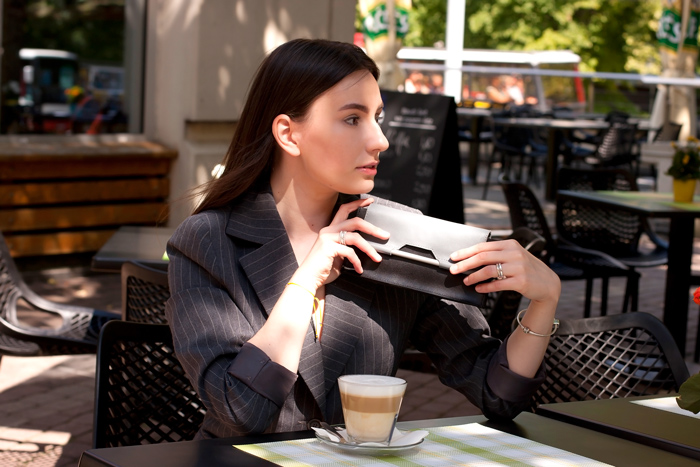 Iconic Latvian photo camera through the prism of fashion design.
Have to take a step back and refer to one of my Riga Fashion Mood reviews from early October 2014 that covered the runway show of an emerging Latvian designer Liene Bukovska (read it once again right HERE). Back then I mistakenly believed that designer’s vision is all about simplicity and practicality of womenswear. Well, simplicity and practicality really persists, but the emphasis of all designer’s talent is place rather on accessories, i. e. bags, than clothing. In this case clothing comes second place, though it’s not taken for granted or a sort of an addition to bag range, in turn, clothing comes as an essential part that brings the balance.
It took almost a year for our paths to cross once again, this time it resulted in more than a seat in front of the runway – quite an interesting, and educational so to say, collaboration. And a more in depth insight into the basics of Liene Bukovska’s fashion child – KUMMA label. As they say, better late then never, right? 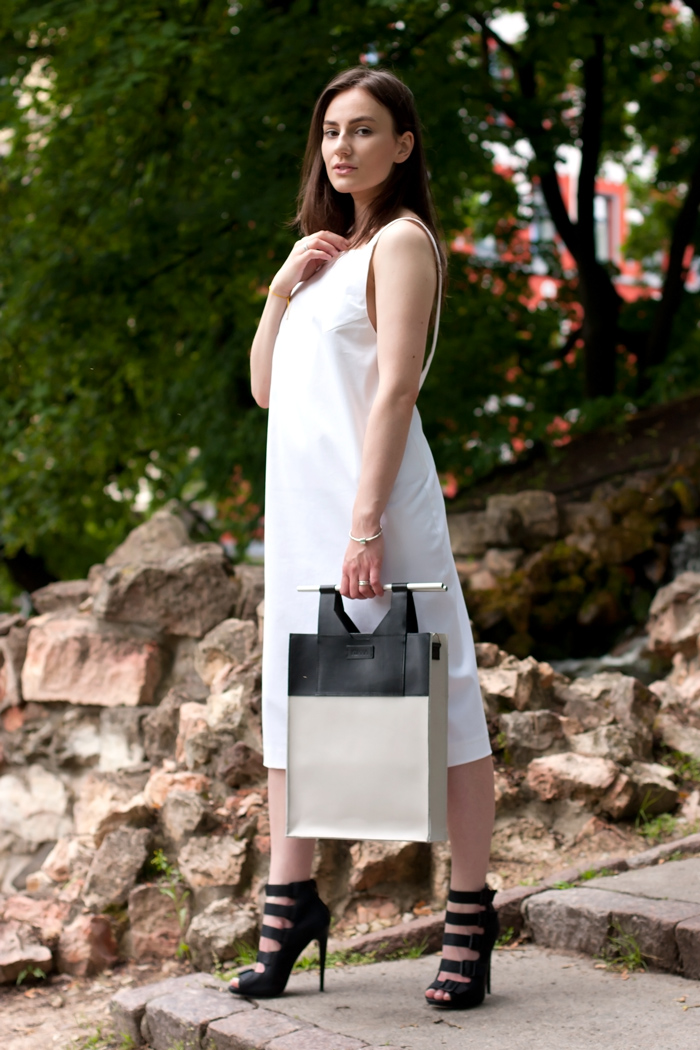 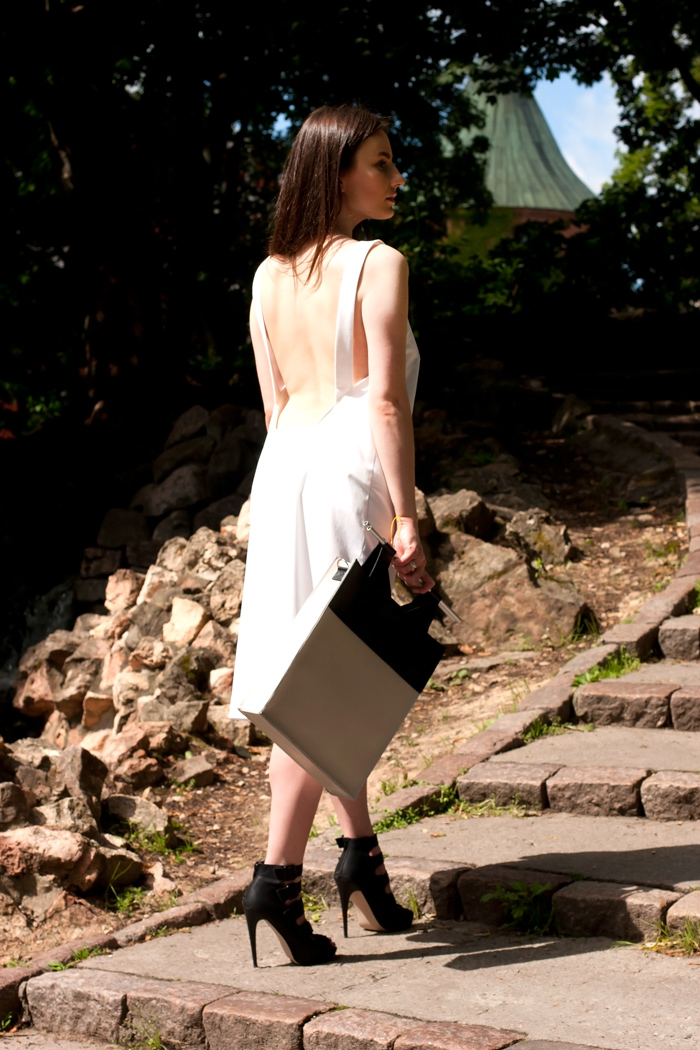 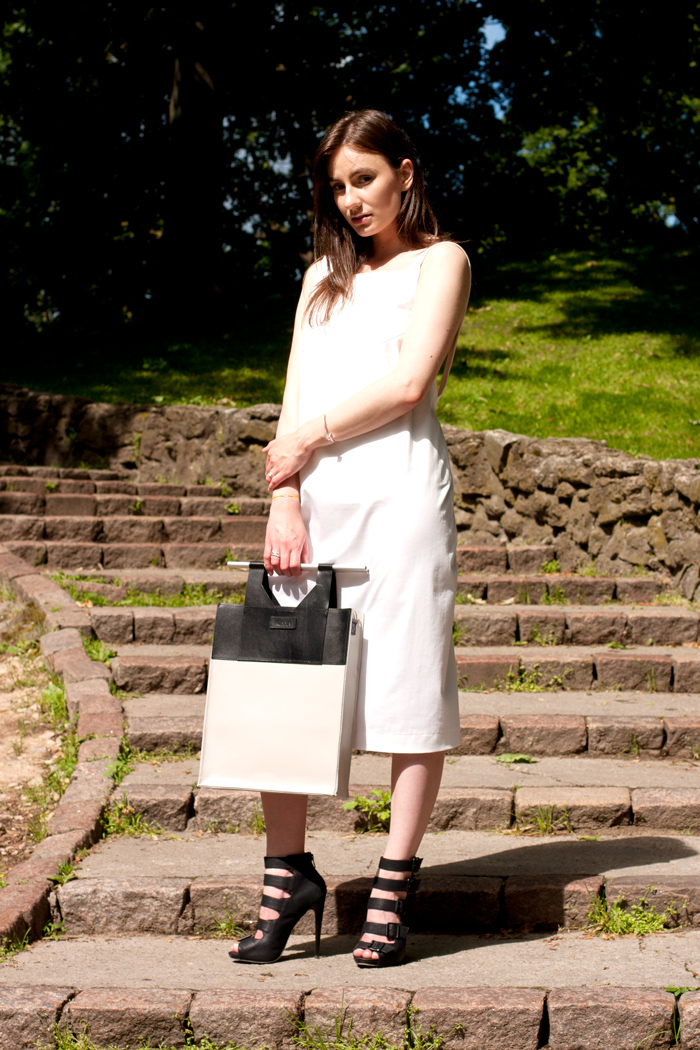 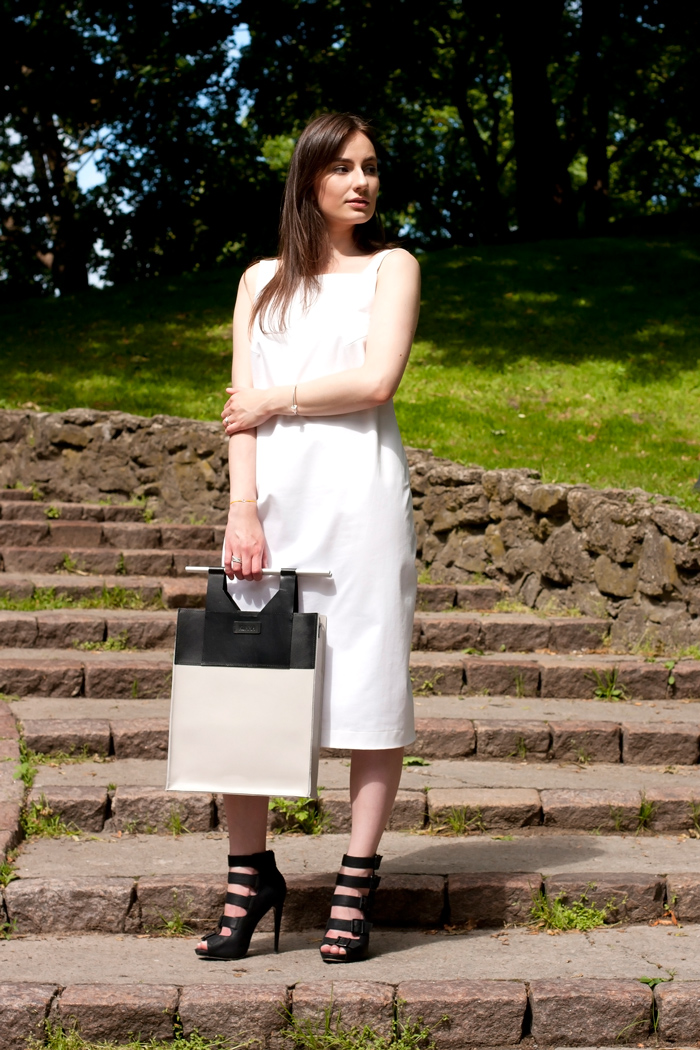 Speaking of Liene Bukovska, her brand and design vision. The emerging designer has just received Master’s Degree in Fashion Department at Art Academy of Latvia and the collection ‘MINOX’ we are going to talk about in more details a bit later was represented during the annual runway show of academy’s graduates, this time at one of Riga’s tram depot, back in early June. Having prior received a Bachelor’s Degree in Functional Design the young talent managed to combine functionality and fashion in her designs. Thus, again, both bags and clothing translate a perfect balance of fashion and practicality that can equally suit minimalistic personality and real fashionista’s image. 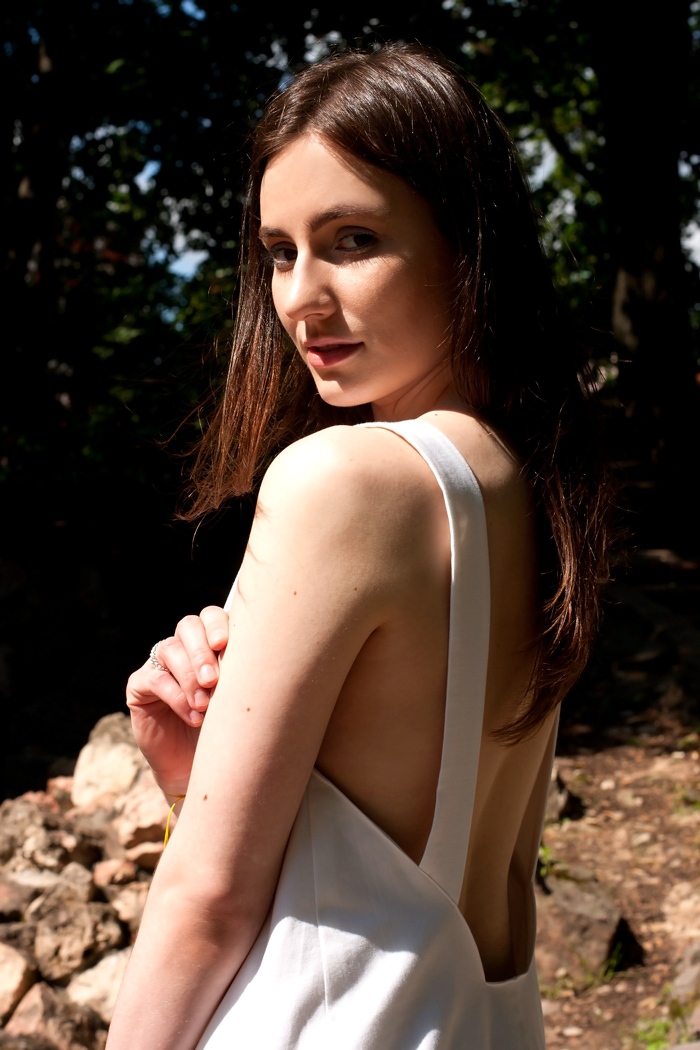 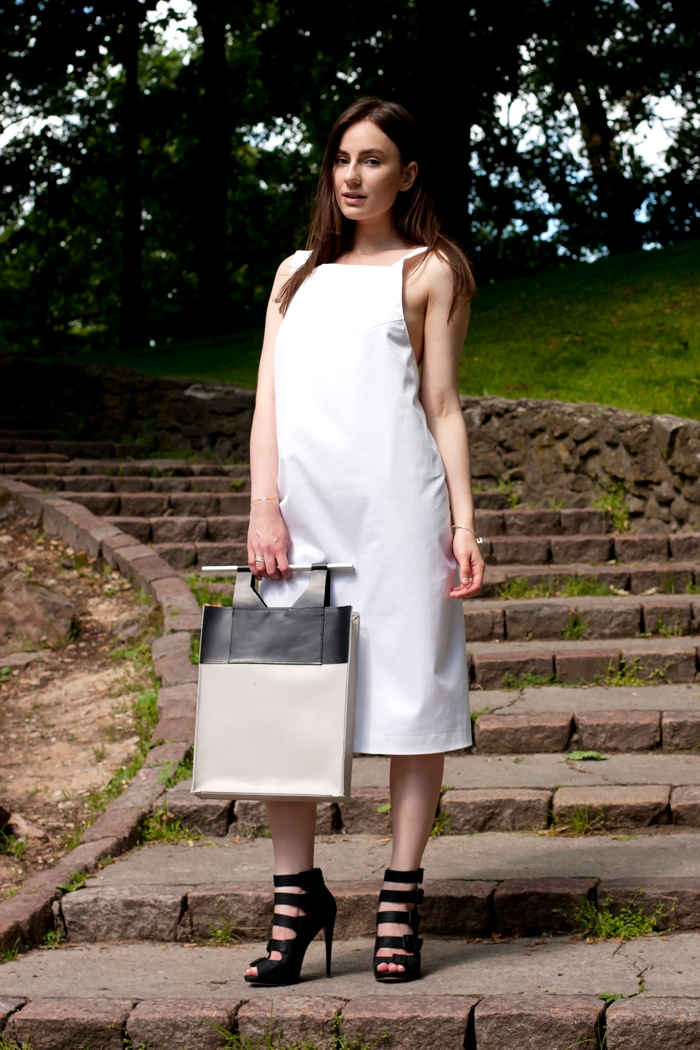 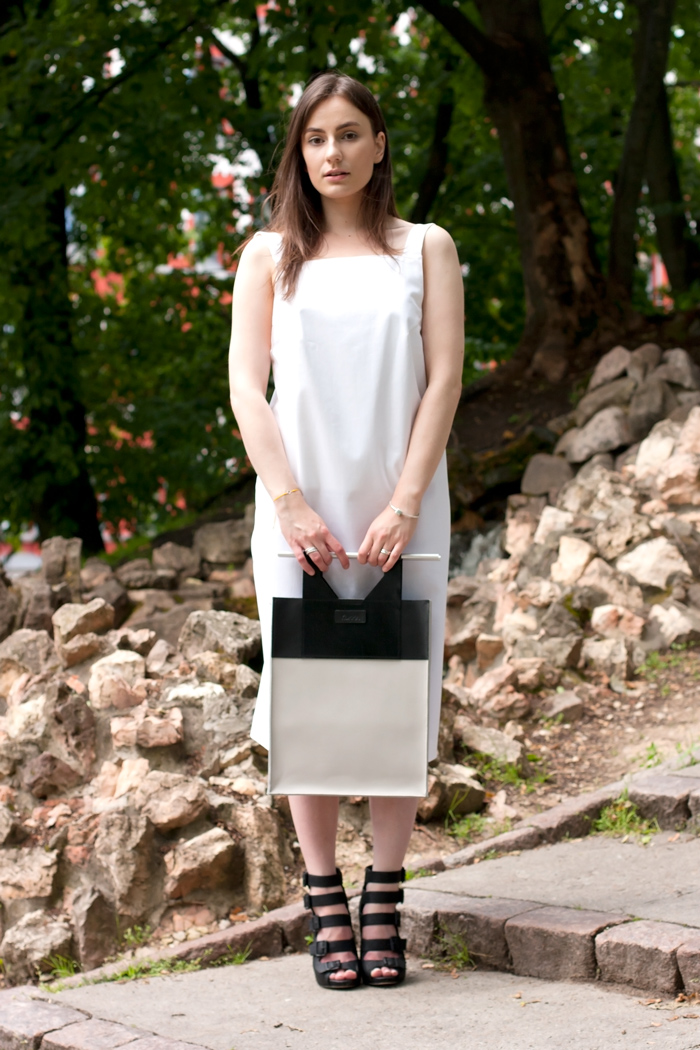 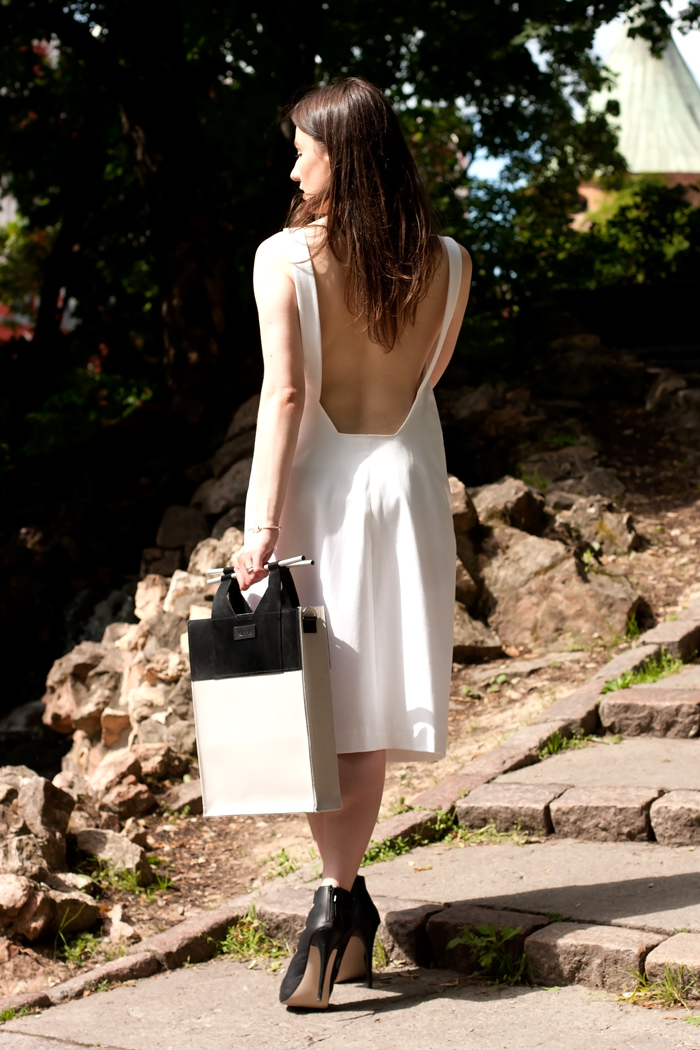 KUMMA. A very interesting, unusual and easy to remember name for a young brand, don’t you think? Well, don’t know what kind of associations or images does the name provoke in your minds, but being raised in Latvia and educated about country’s culture, folklore, literature and the rest what comes to this list, I had this feeling that the name has something to do with Latvia in first place. So the brand’s name KUMMA came up from a breed of foxes, the red one we all are familiar with which in Latvian language is called ‘kuminsh’ (Lat. ‘kūmiņš’). The image of kuminsh was overtaken by Liene Bukovska straight from Latvian folklore and used in such branding aspects as logo, overall image and respectively the name. 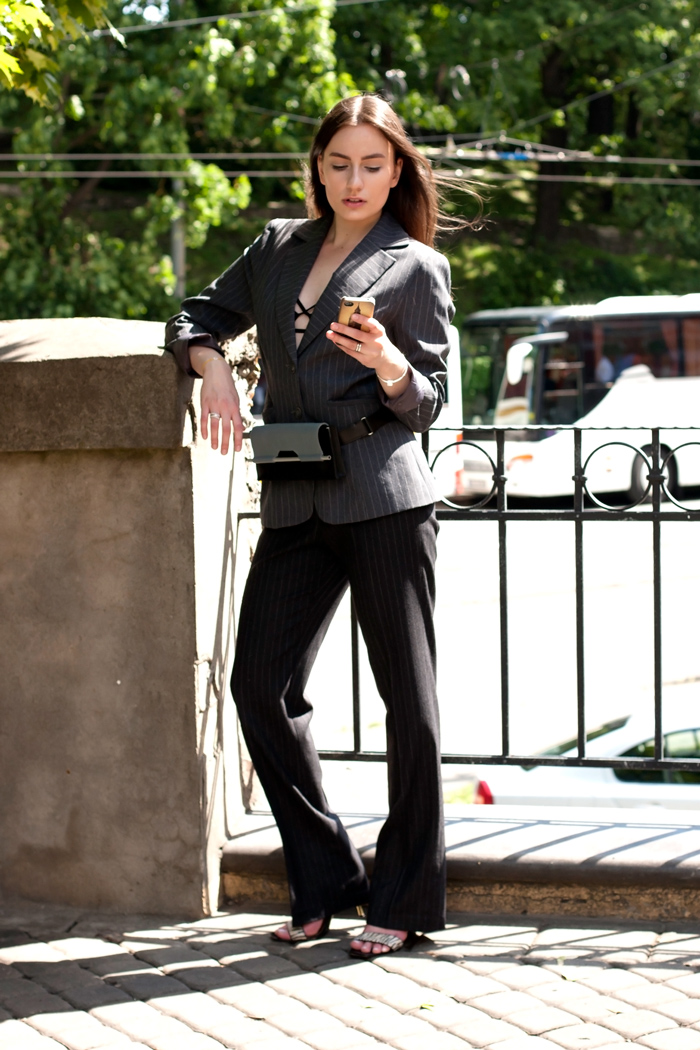 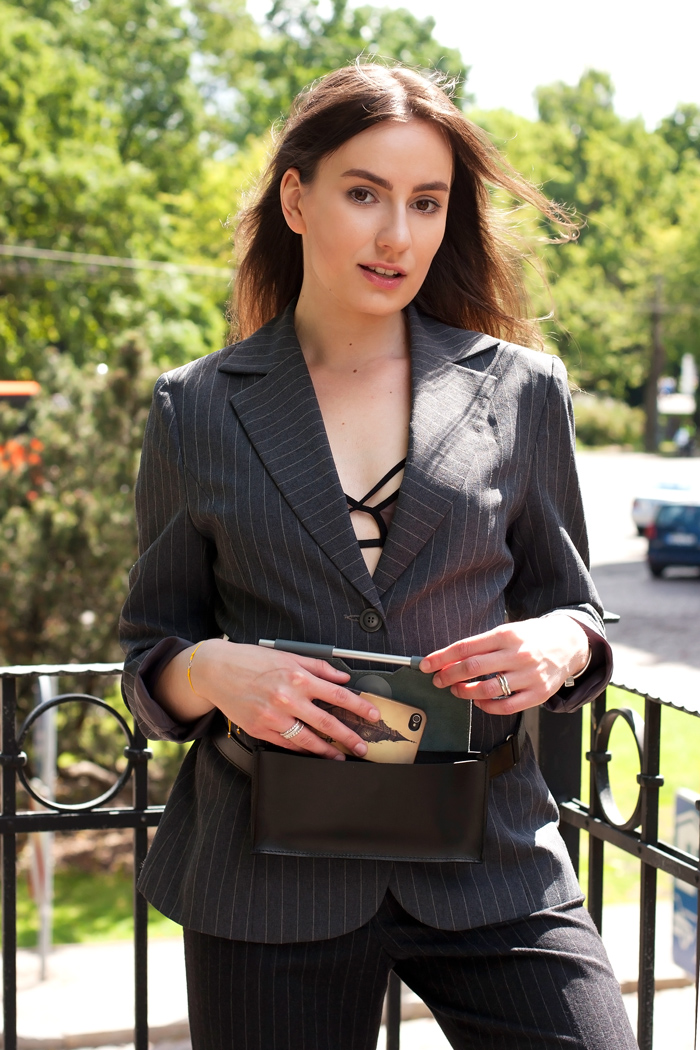 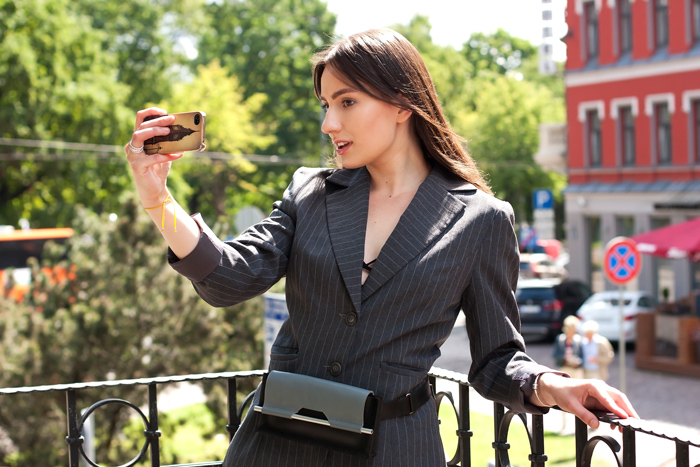 Foxes are known for adaptability, so are KUMMA bags that can be applied to ones wardrobe on 24/7 basis no matter what your lifestyle is. Changeability, modernity, minimalism – these three words are placed at the core of KUMMA brand. The words that can easily describe the essence of this emerging Latvian label. KUMMA‘s pieces are a mix of high functionality, so-called marriage of traditional and non-traditional fabrics, and thought through designs. What else can a modern lady ask for? You’re right, a good quality bag with “Made in Latvia” tag. 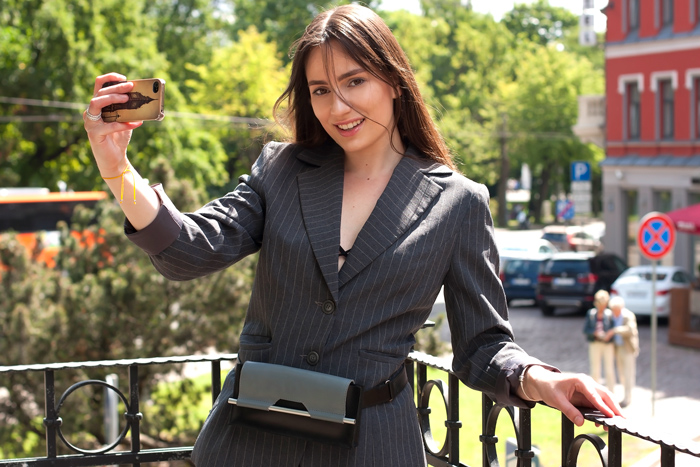 Now the vision. The idea. The main concept. Or should I put it simply, what Liene Bukovska, the designer of KUMMA, finds as a sort of inspiration. Can’t escape but mention the fact that this was grasped by me pretty well back then when I first came across creations of the designer. KUMMA‘s collections are not only about visual aspects and thought through designs, it also comes as a sort of education. The glorious pages of Latvia’s history, legendary personalities – a lot has vanished from our minds, I mean the people of Latvia. It all is brought and about to be brought to life by an emerging designer from a little Easter European country. And I can’t describe the concept any better than I did before: “So it is, fashion that teaches you not only about style and trends, but also helps to expand personal horizons by making you discover something new or press some serious topics”. 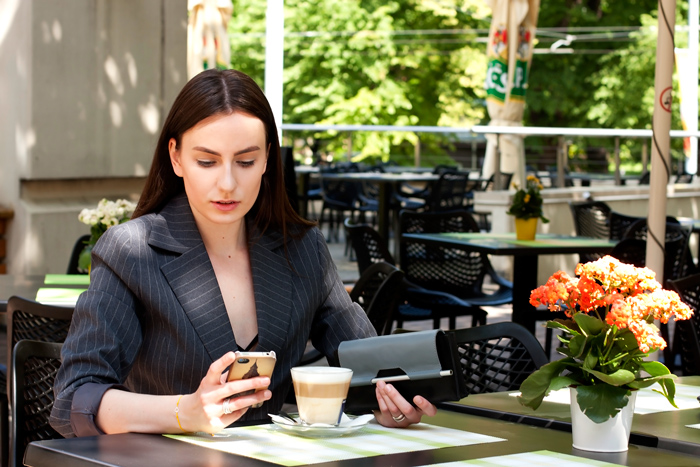 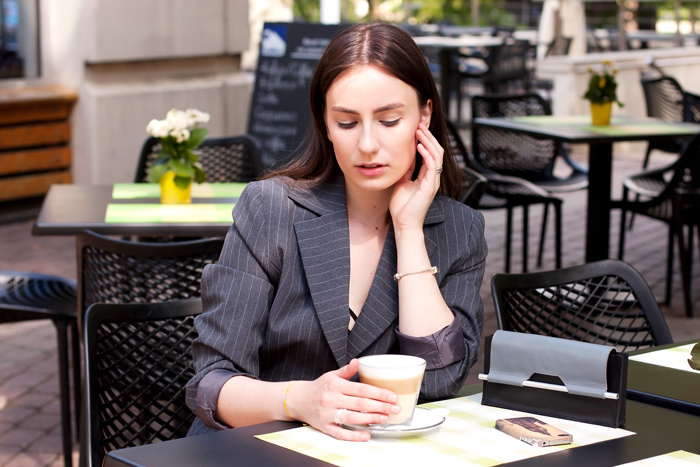 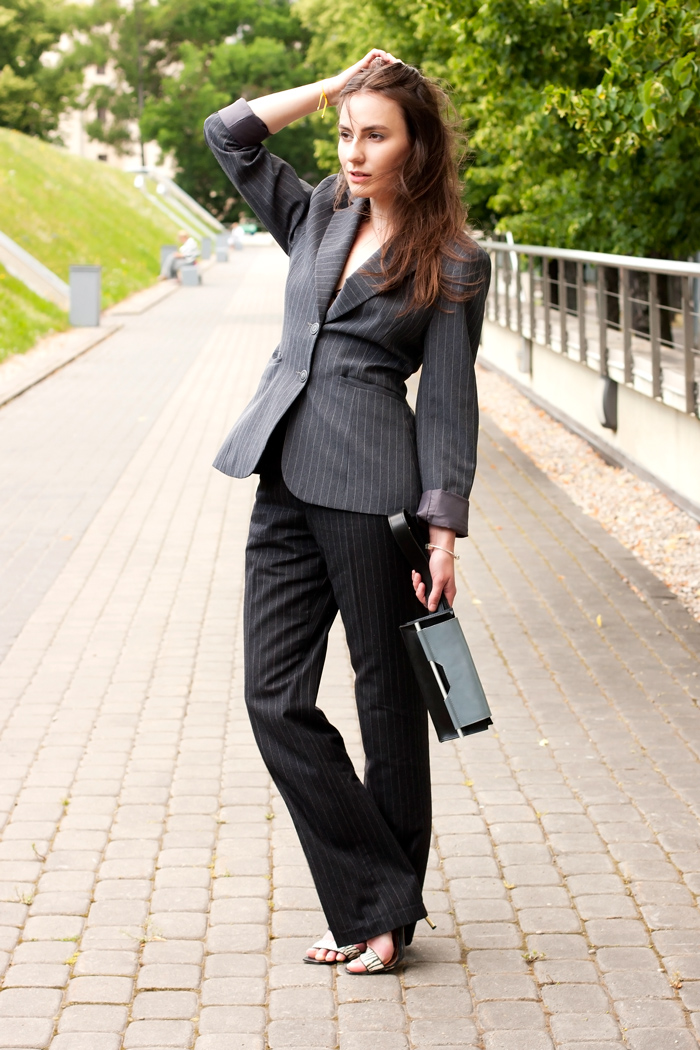 The previous collection, the one that was showcased during Riga Fashion Mood back in October 2014, was inspired by the image of Zilākalna Marta both Latvian national healer and one of the seven most famous healers in the world. This time the horizons are expanded even further. Collection filled with retro and futuristic vibes is a result of inspiration derived by an iconic VEF MINOX photo camera. The mini camera was invented by Riga-based Valters Caps back in 1930’s and is said to be popular among secret agents from around the world. A legend or no, but this fact will definitely now place Latvia on your personal world map. We have to thank Mr. Caps for making our lives much easier, because if it wasn’t him and MINOX we could still be walking around with gigantic cameras and phones that would never fit in our bags. 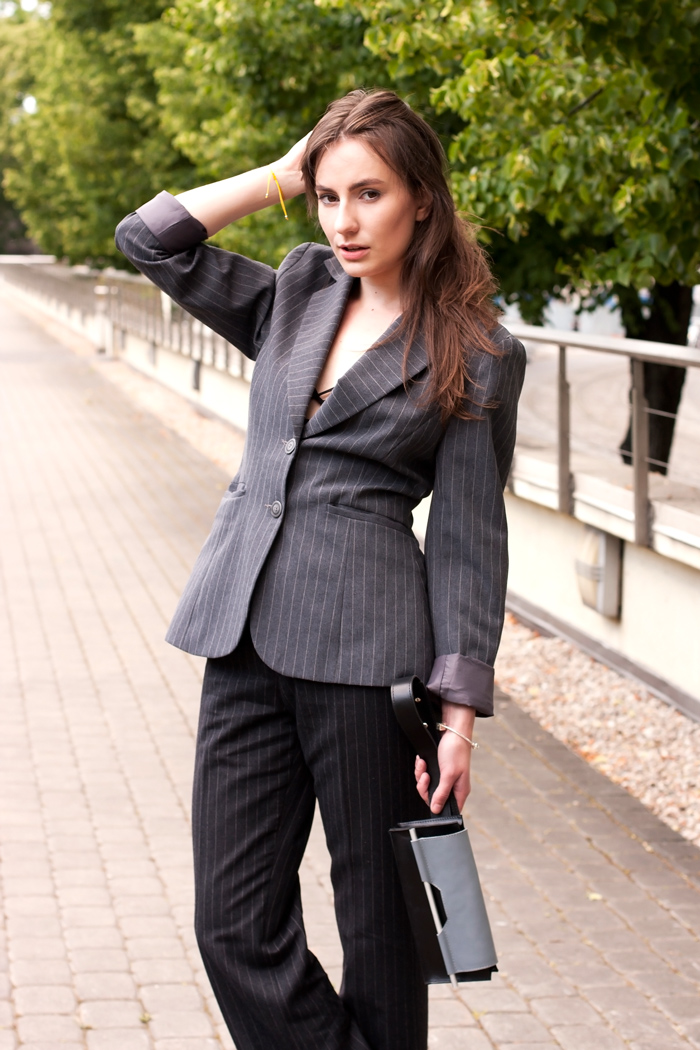 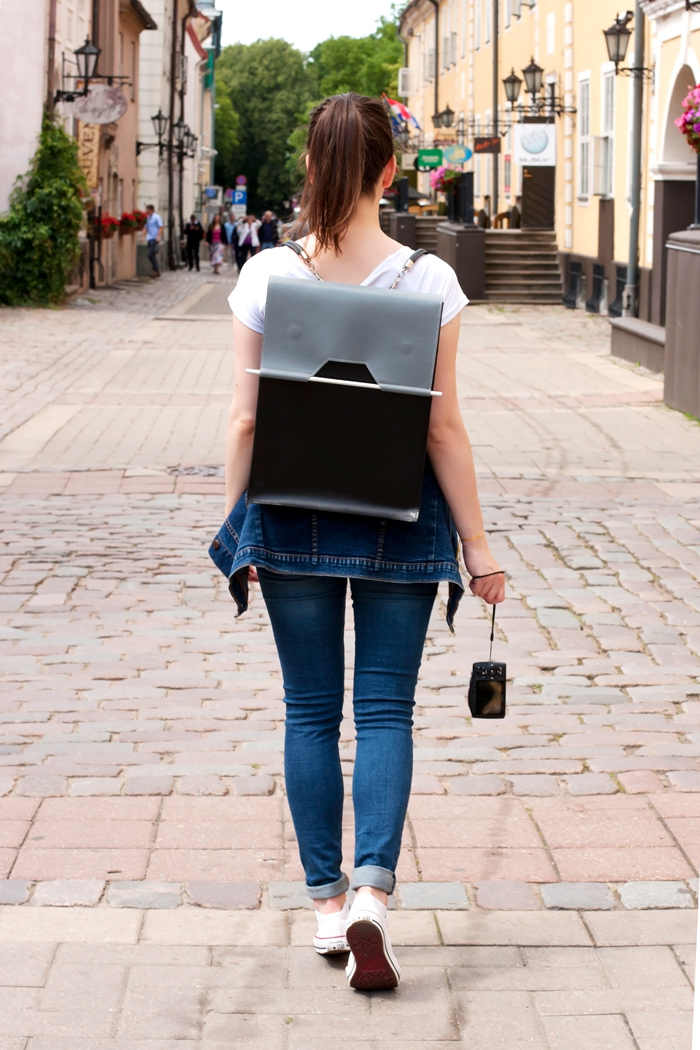 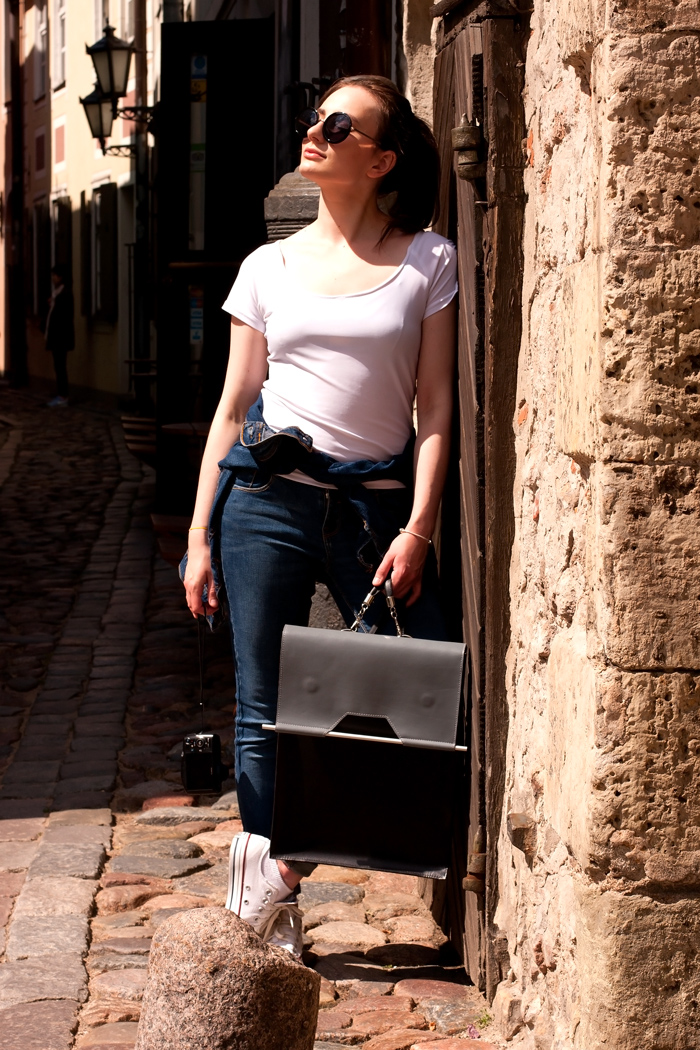 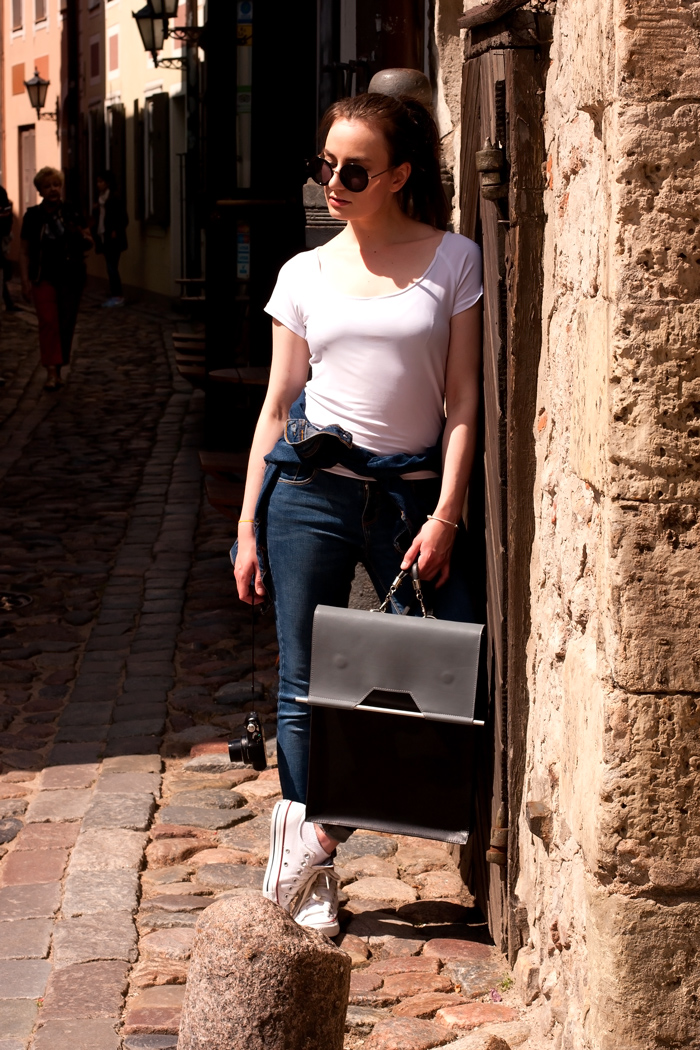 If we pay attention to details, we’ll notice straight lines, simple forms, the obvious minimalism that is inherent to both the new collection of KUMMA and MINOX camera. The MINOX camera might have long gone to the shelves of local and foreign museums, but no one said the agents, I mean the fashion ones who can be spotted in the streets of every single city, and the legacy left by iconic photo camera and its creator Valters Caps have sinked into the abyss. Have to point out that every single bag from the new KUMMA‘s collection is truly able to turn you into that agent of fashion. No matter where you are or what you are doing. You can be that secret fashion agent hiding among the group of tourists, you can also be a fashion business agent who did replace the actual MINOX camera with an Iphone (or any other gadget) and keeps reporting all the news straight to Instagram, you can also be a new Bond girl wearing a full KUMMA ensemble, a dress with charmingly open back will not leave any suspicions. Everything is possible. It was proved back in 1930’s by VEF MINOX and it is proved now again by KUMMA. 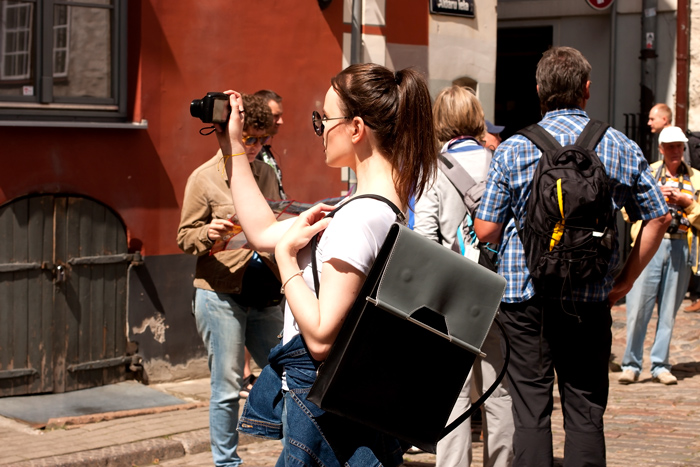 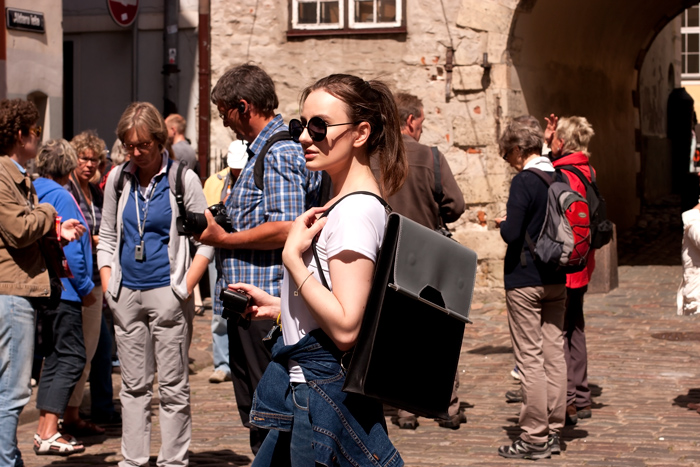 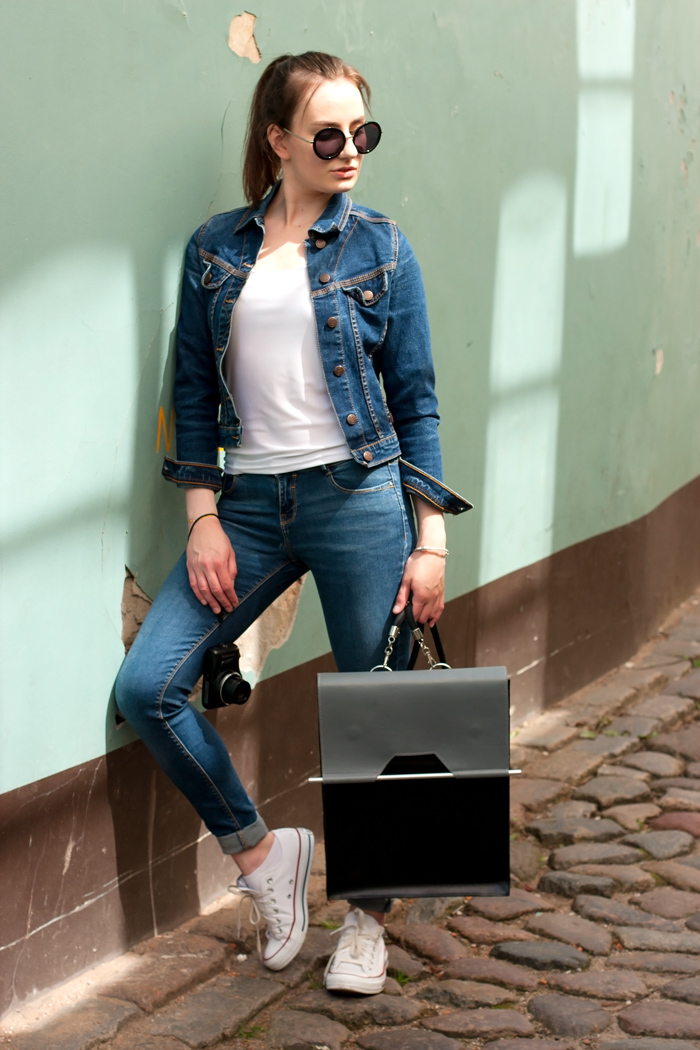 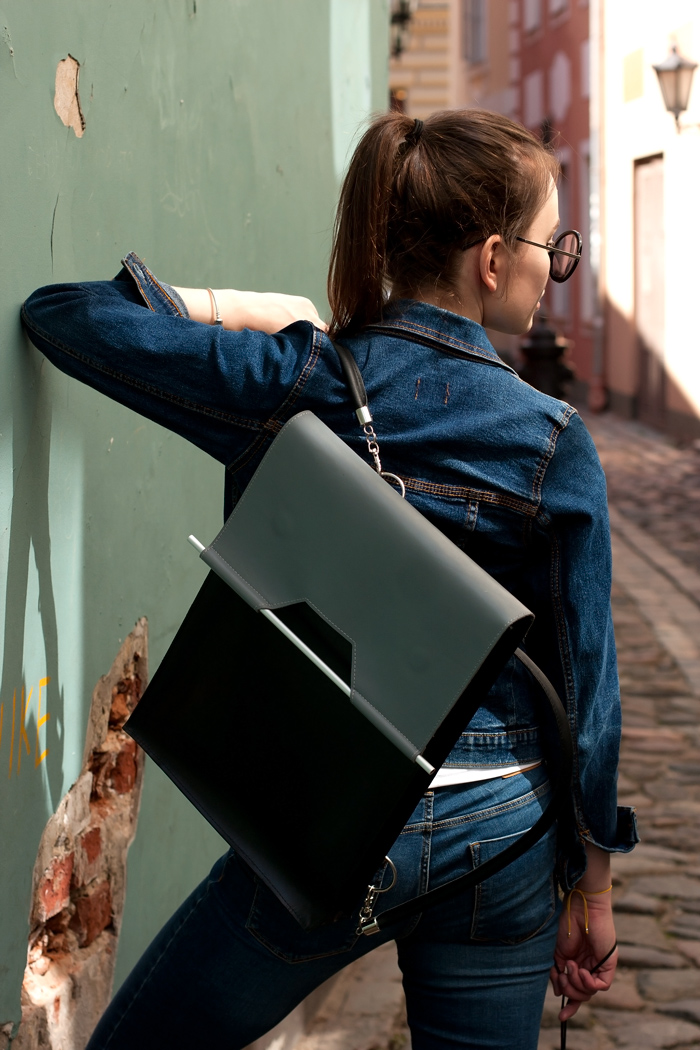 P. S. Just a little fashion note for those who are the touch-n-feel kind of people, just like me, KUMMA’s MINOX collection can now be seen, touched and felt at the LMA Showroom (showcase of Art Academy’s of Latvia graduates creations) organized by PAVILJONS concept store (Address: Tērbatas street 55). 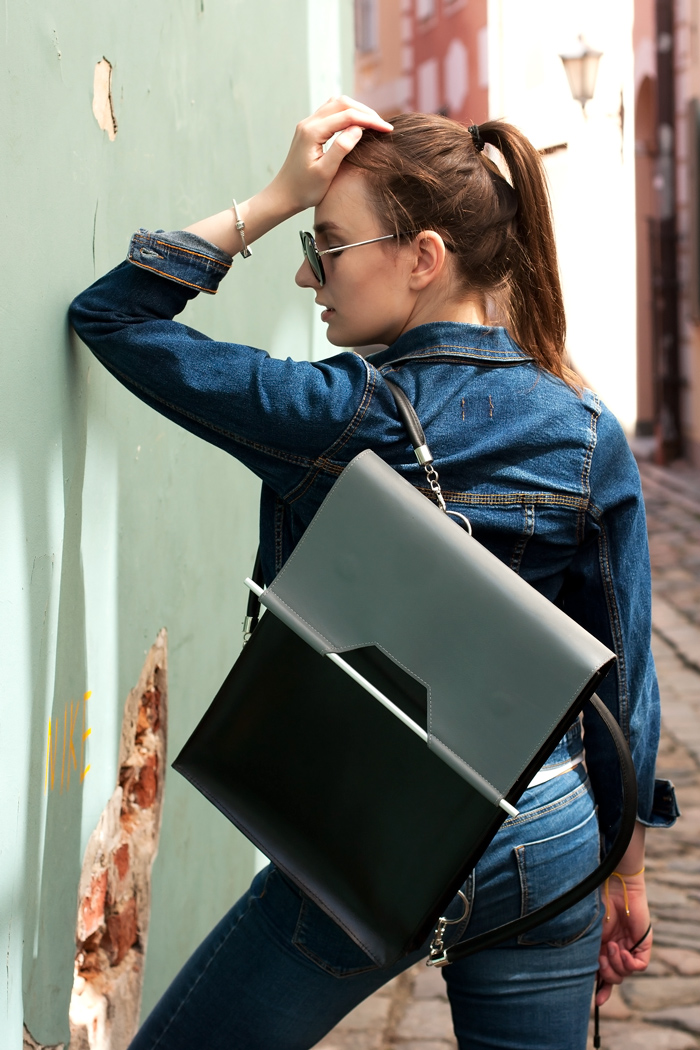