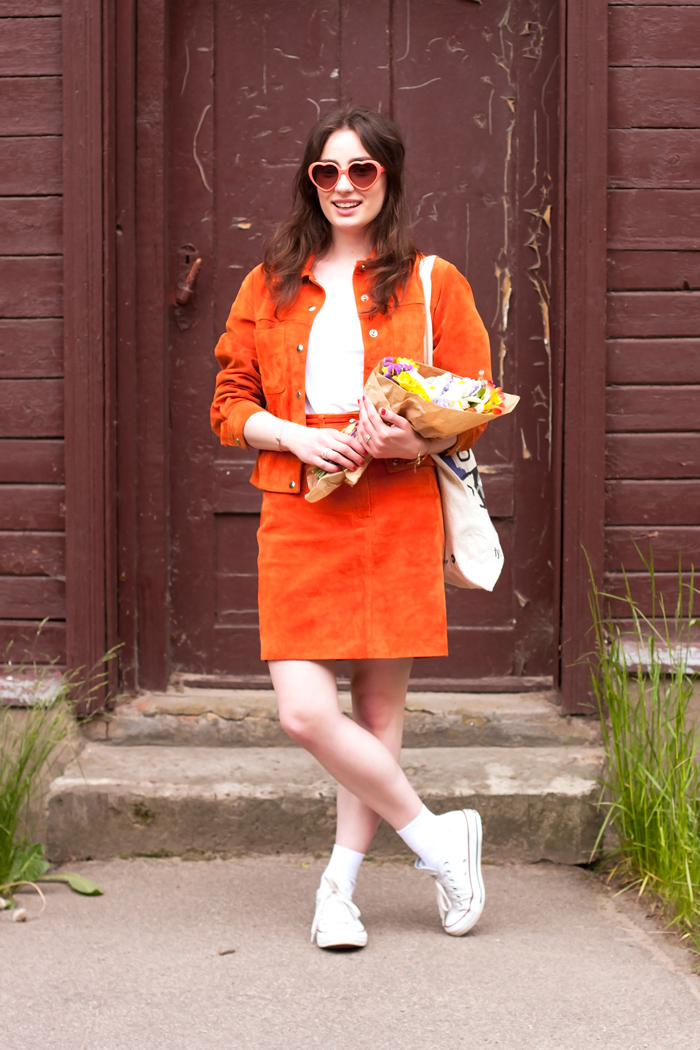 Orange power with East London influence.
Don’t know where should I start with East London vibes or with sharing a couple of words on the orange color. No, I should probably start with bringing my ’90’s kid’ tag to the front. Was feeling such a kid that day and still do when looking at these photos. Basically, that’s what the heart-shaped sunnies are doing to me. I put it and a huge transformation happens. I had heart-shaped shades back in 90’s and I swear I have a picture of myself wearing a pair, red ones, just need to search through my family’s photo archives (and will surely show it to you in Instagram and Facebook, don’t miss it!), so since that decade is back in fashion I couldn’t resist but satisfy my inner child. Who would have thought that some 20 years later my red heart sunglasses will get a sort of revival by means of an orange successor from Sinsay. 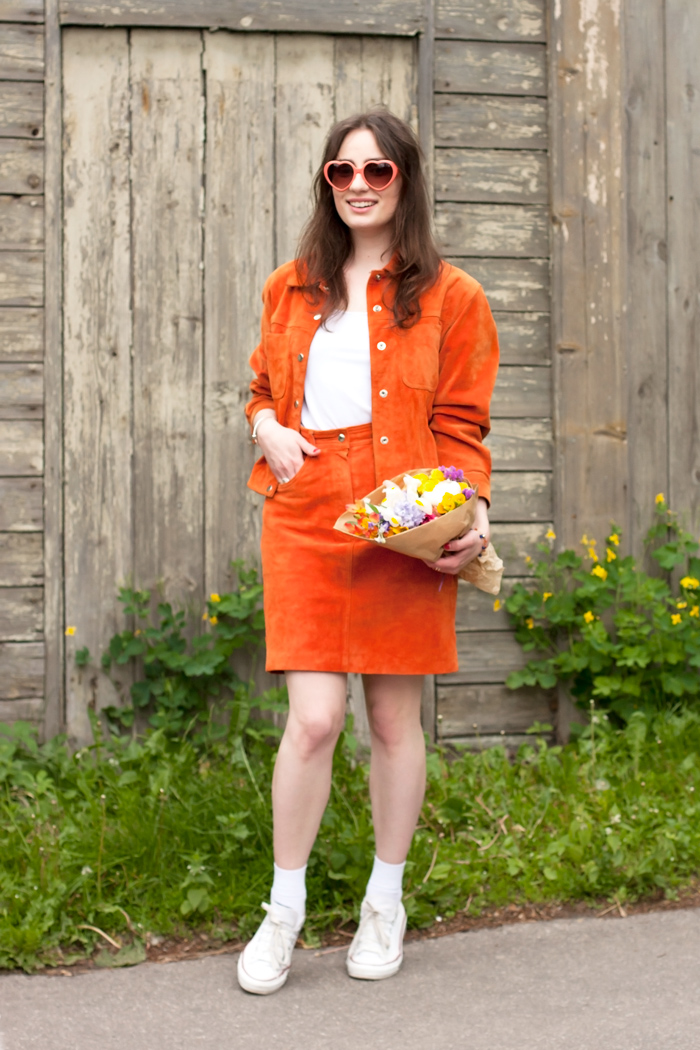 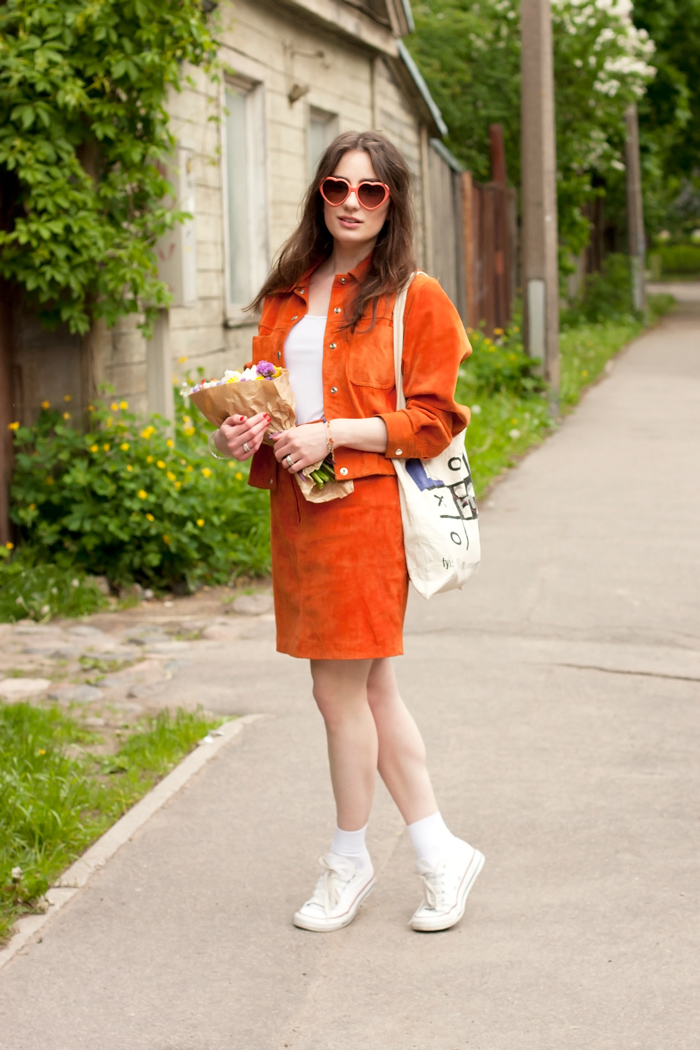 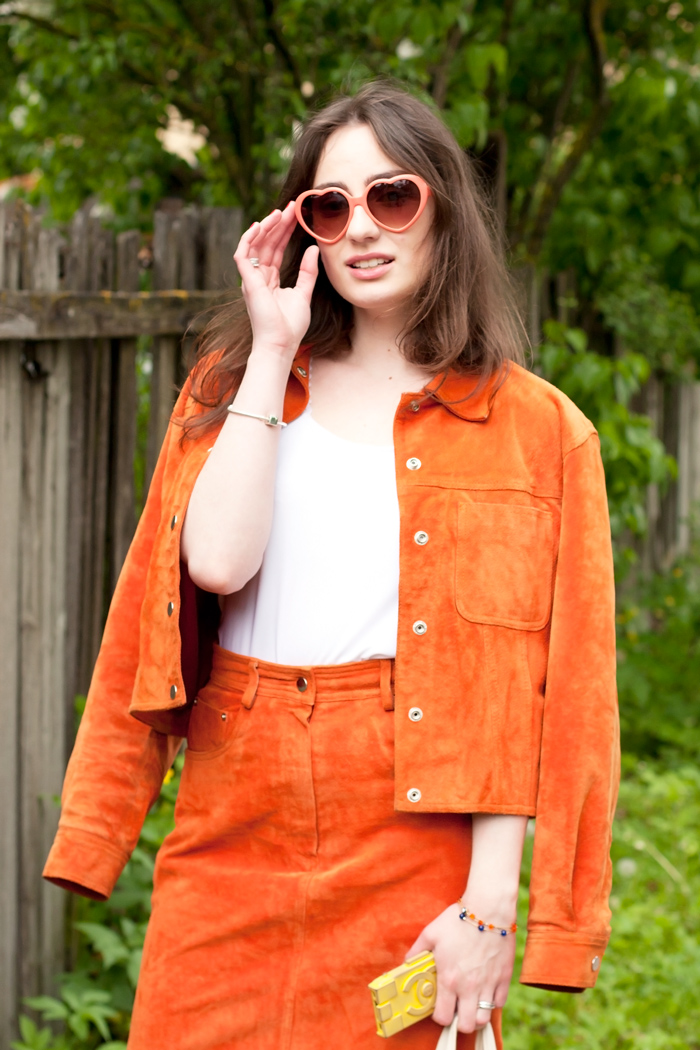 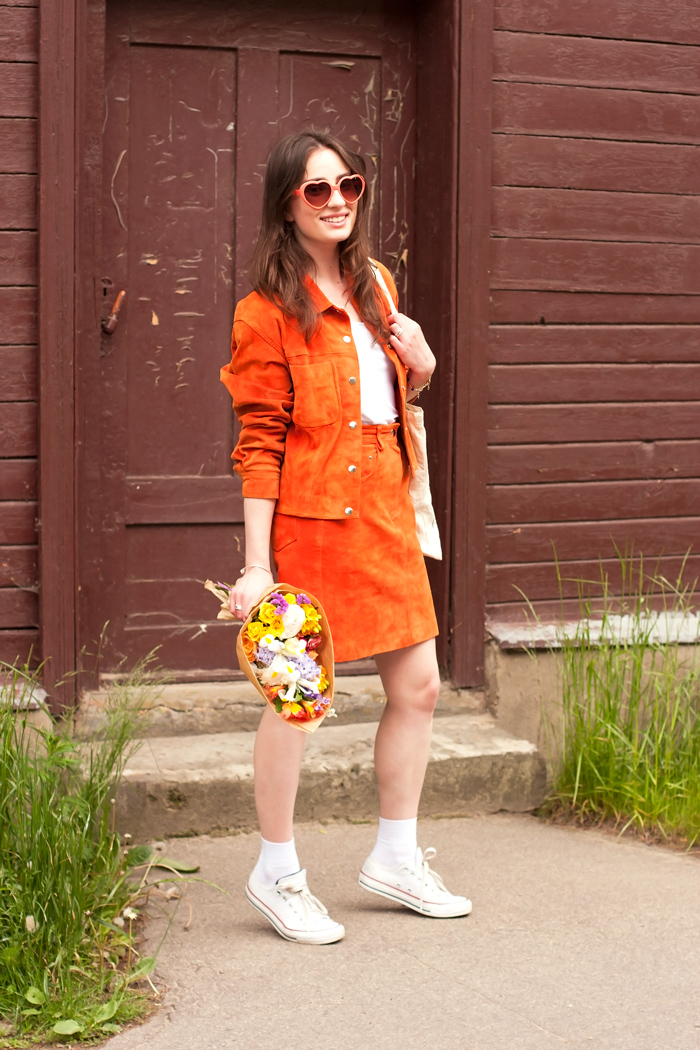 Speaking of orange color as it’s actually the main hero of today’s outfit story and one of the leading colors within my seasonal wardrobe. I have previously mentioned that from time to time I keep coming back to this colors and when it happens I tend to take it to a serious level. Over the last couple of years I’ve been getting this and that stuff in orange color without any second thought, you know when you like a piece and see that it suits you perfectly you usually get it. When it came to looking through my seasonal wardrobe and forming it I found out that there’s a big number of oranges in different shades (milder and brighter). What am I trying to come up with is that in the season that is practically ruled by yellow I’m stepping out with orange alternative, because… Because I prefer the orange more and had been giving preference to it on a subconscious level. And it’s not like I don’t like yellow anymore and am not going to wear it, my vintage jacket in power yellow just popped in my mind, I guess orange simply drives my inspiration and ideas-forming process with double force, while leaving a room for enthusiasm and adventurism. Now I took it from an article about orange color characteristics, but besides sounding too good, these attributes are of absolute truth. I know that. 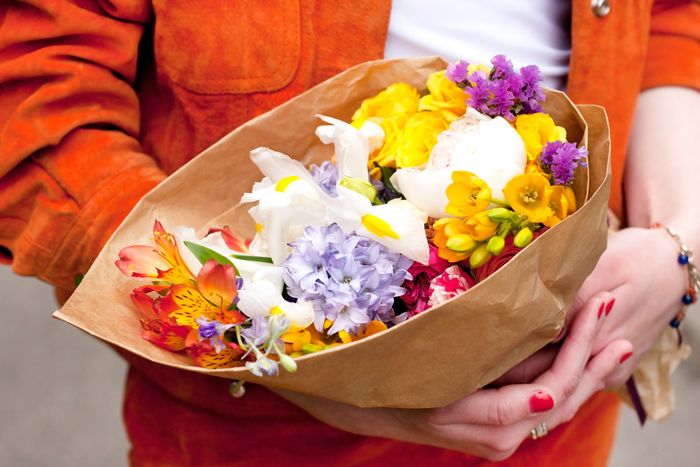 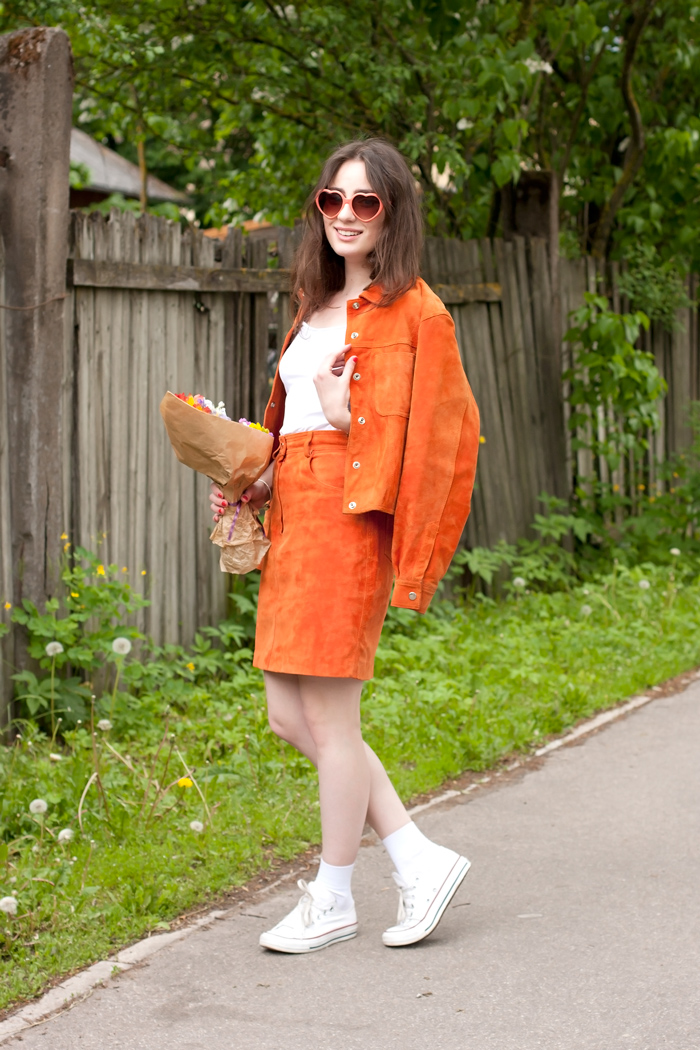 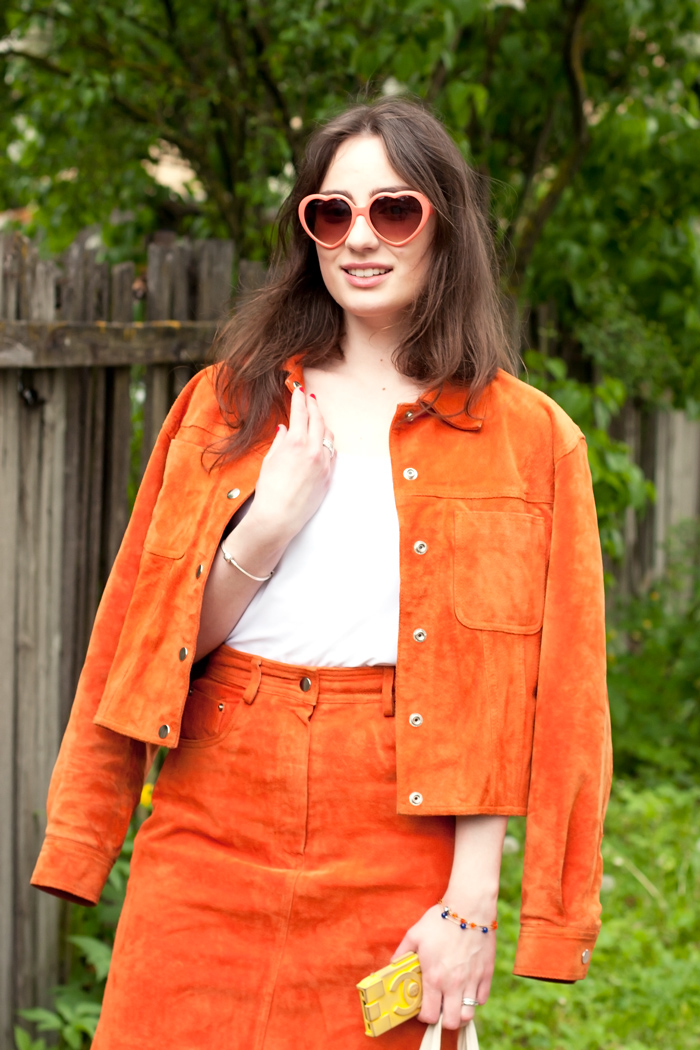 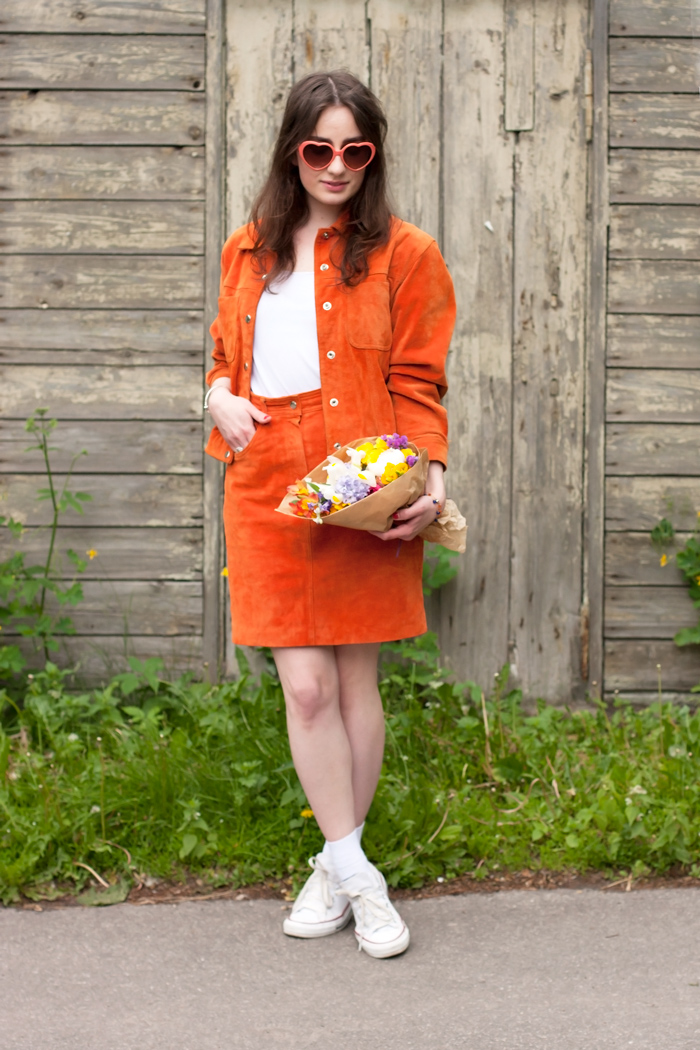 And finally moving to the East London. In a figurative sense. In the beginning I somehow thought that today’s outfit was influenced by the 90’s era and it surely was, but to a little extent. It’s the Shoreditch and Brick Lane areas and its inhabitants who educated me on creativity with a bit of freakishness kind of style. Or attitude. Three years spent right next door to both of these didn’t go in vane. Mixing pieces you haven’t combined before and making it look fresh, interesting yet super casual (adding something vintage is also important) – that’s the philosophy of East London. And flowers. Flowers from Columbia Road Flower Market on Sunday is a sort of tradition in the East of London Town. So here am I sharing the philosophy of East London in a little Eastern European city of Riga with a bouquet from my dearest Vika of Ziedu Sēta in hands and a canvas bag with Istituto Marangoni design on my shoulder. It’s always the East kind of thing for me, have you noticed? 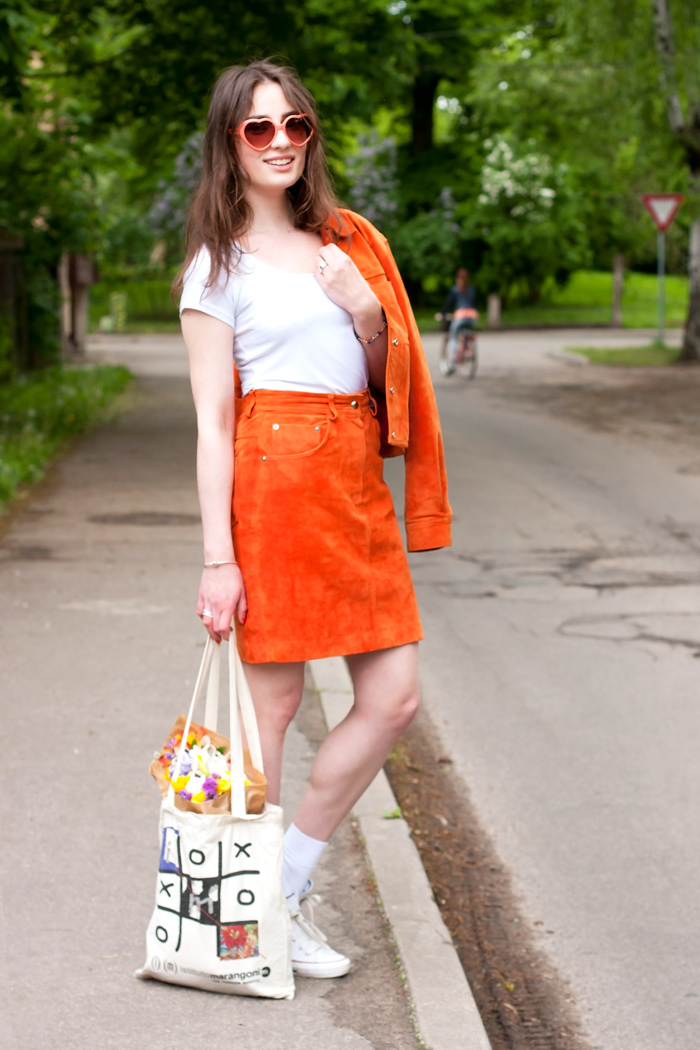